Hi, my fellow friends in sport! It’s me, Organic Cherry Pie Girl! This time I come to you with a slightly different story. This is my story about my most recent Ironman journey. This time, it happened to be Ironman South Africa. Now, to understand the beginnings of this adventure, you have to understand my attitude about life. I’m just over five feet tall and probably compensating for the lack of height with these giant adventures. I have an “OH YEAH! I’ll show them!” attitude about things. I’m also not one to take the easy way out on anything either. Yes, I have huge goals, but I don’t want to achieve them by doing a triathlon in my backyard. I have a compulsion to find success in the hardest of things. It’s a test of my will. A test of my heart. A test of my endurance. It’s my way of telling the world that when things aren’t perfect, aren’t going right – I choose to fight back! On top of that, there was a little part of me that was laughing at the idea that I was actually going to the place where they film Air Jaws for shark week. What can I say, I’m a sarcastic little thing too 🙂 Anyway, the real story started when I landed in South Africa. Literally, the moment I stepped off the plane, things started to go wrong. I struggled with such a long flight and time change. Many important things needed for race day were, in fact, stolen. The roads that I would be riding on were in such bad shape that to call them roads, is actually playing fast and loose with the term ‘ROAD’. I was told by everyone that it was not safe, by any means, to bike on those roads by myself. As more and more things seemed to go wrong, I was becoming more and more anxious.

Finally, I began to see more athletes showing up which eased my very apparent tension. I thought to myself “ok, now things are falling into place and everything will be ok.” The week of Ironman they were having lots of practice swims because no matter what kind of swimmer you are, that was one crazy ocean. Practice swims were pretty much the smart thing to do especially in this case. So I show up one morning and check in for the practice swim. The catch was: They were waiting for the director to speak to me before I went into the water. I was telling them that I could swim, I’d be fine, just let me go. They still wouldn’t. Odd you say? Yes, yes it was. However, I sucked it up and waited for the director because the last thing I needed was to fly all that way, only to be disqualified because I didn’t wait an extra two minutes. Why did he want to talk to me? To inform me that I needed to stay on one side of the pier because SHARKS were spotted roaming around on the other side of the pier. SERIOUSLY?! I’ve been joking about shark week and Air Jaws for nearly a year and now, all of those hilarious jokes, were suddenly not quite as funny. Sorry to disappoint but even I can’t put a positive, sarcastic spin on that one. Seriously though, despite whatever was roaming around out there in those mur 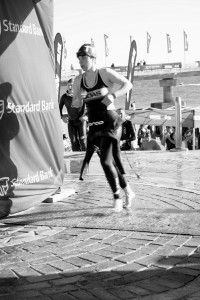 ky waters, the new wetsuit still had to be tested. So, a hundred Hail Mary’s, 4 chats with various ministers, and a big gulp of Red Bull later – I jumped in. I trained hard for this event and not even a shark could stop me!! After spending all winter on my bike trainer, a shark bite seemed like it would be a welcome change of pace anyway….I think. Or, at the very least, it would be a wickedly cool story to tell when I got home – pending I survived the actual shark bite!

Ok, so things haven’t been perfect but by this time, I was checked in, tested the wetsuit, eating my pre-race meals according to plan. Now all I have to do is wait for race day. I was nervous but I was confident in my training. Not confident like “ha, me, five feet of fury, is going to set a course record and rule the world.” Instead it was more knowing that I had done the work. I sat on that trainer for HOURS, day in and day out. I hit those brick workouts with the same passion I’d have if I won the Lottery. I did the work. I was ready.

Race morning comes and I do the usual preparation. Finally, my wave lines up on the beach and for the first time, I actually had the confidence to stand in the front, willing to run into that fierce ocean first. By this time, the nerves are gone and I just wait for the cannon to go off. Sure enough, before I know it, I hear that cannon and I’m running like a crazy person towards the ocean. As soon as I dove into that first soul-crushing wave, my confidence vanished. Wow, the current was so strong. The waves were gigantic! It was a struggle just to make it to the first buoy. The waves were pushing and pulling. For every few strokes forward, I got pushed back one. I just kept telling myself to fight for this and just make it to the bike. Finally after making my way through what were, at one time, shark infested, lost at sea type waters, I made it to the bike.

Ah, my sweet spot. I’m on my bike and now I’m ok. Only, I wasn’t ok. Before the first loop on the bike was over, I knew that the amount of climbing that was stated in the race description wasn’t completely accurate. The roads were horrific and not even 8 feet wide in certain spots. I felt every single bump along that journey. It was such a bumpy ride that I lost water bottles, air cartridges – everything fell off my bike. Even my chain. Very real pain was radiating through my arms, down my back, and into my legs. By the second loop, my back was in total spasm. I saw people on the side of the road next to their bikes with disappointment and despair written all over their faces. I was also fighting the urge to just abandon my bike and call it a day. Behind those sunglasses were very real tears running down my face. All I could feel and think was disappointment and anger. All of that training time and my times were worse than ever. My body was in so much pain. I was sick from that crazy swim and ingesting all of that murky, salty water. I was shouting and pleading with myself to just quit. I was telling myself that I needed to quit. My teammates and friends would understand because nobody would have expected this kind of difficulty. I was trying to justify quitting.

Finally, I somehow made it to the end of the bike. I got to the dismount line only to find that my legs didn’t work. I couldn’t stand up straight. Now my tears weren’t my own. Everyone saw them. No matter what I did, standing up straight seemed impossible and the only thing on my mind was the marathon. No! No way! I’m done! So I was carried off to the medical/drop out area. It was surreal to think that I had come so far around the world just to drop out of a race. Everything was running through my mind. My time was so far off the mark. I was sick. I was in pain. I was angry. This wasn’t the race for which I had bargained. Then, in an fleeting moment of clarity, I knew I had to at least try. I had to get to that run for my little girl who thinks I’m her super hero. She was waiti ng for me at the finish line.

So I told myself again that I must try and I finally forced my body to walk towards the change tent. I threw on my running shoes, wiped away the tears and off I went. And you know what? I was RUNNING. I had it in me. It was there the entire time. When all of my body and logic was telling me to quit, my heart was not willing to let this go. After all, what do I always say when things get tough? I CHOOSE TO FIGHT BACK. I choose to overcome. I choose to TRY. As I made my way along the run course that anger turned into pride. Knowing that despite everything, this race didn’t break me. It didn’t beat me. I didn’t make it to Kona or best any of my times. I did, however, get something even better. I found out just how far I can go when everything seems impossible and when the obstacles seem insurmountable. I found out that all five feet of me isn’t so easily broken. Ironman South Africa didn’t give me what I was originally looking for. Instead, it gave me the greatest gift of knowing that if I can do that, I can do anything! All you need is a tiny part of you that doesn’t want to quit. I was positive that all of me wanted to quit but it was that tiny part of me which knew that if I quit, it wasn’t about what my friends thought. It was about what I thought. I know I can do better than the time I had in South Africa, but, more importantly, I know that I can do better than give up. When all seems lost and impossible, it’s about finding that courage to stand back up – battered and bruised only to tell the world “YOU DID NOT BREAK ME. I WILL FIGHT BACK.”

So my friends, I’m saying, each and everyone of you out there has the power to overcome e

Happy training my fellow friends in sport. Keep going. Your dreams will come true if you just persevere.