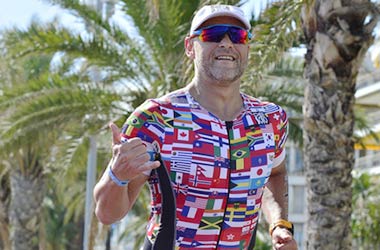 5 years ago I was morbidly obese and decided to make some lifestyle changes. After losing weight I joined a running club (literally to learn how to run) and did a couple of 10k races, but got bored. Then I took up mountain biking and combined that with trail running from an exercise perspective and loved it. Three years ago my wife and I were on vacation in Hawaii right as the Ironman World Championship was taking place in Kona and I became fascinated with the concept of such an endurance sport combining three different disciplines.

I started watching triathlons on TV, especially the Olympic distances and became more interested, but to be perfectly honest too scared to even contemplate trying it out. I started working on a project in Istanbul and became friends with a group of people who did IM races. Before I knew what had happened, I had a coach and was training for my first IM70.3 race. The first one happened in August 2018 and since then I have done 5 more races including the World Champs in Nice.

After I did my 3rd race in March 2019 in New Zealand, it became apparent that I was not on top of my race fueling and hydration. As fate would have it I read an article authored by Susan about this topic and immediately contacted her. We started working together then and Susan has since helped me plan and execute perfect fueling & hydration strategies for each of my races. If it was not for Susan I would not have been able to complete the World Championship race, which was a really tough course.

Every time we interact, I learn so much, so much so that I have now asked Susan to become my coach to take my training and racing execution to the next level. I am truly grateful that she has accepted this challenge 🙂